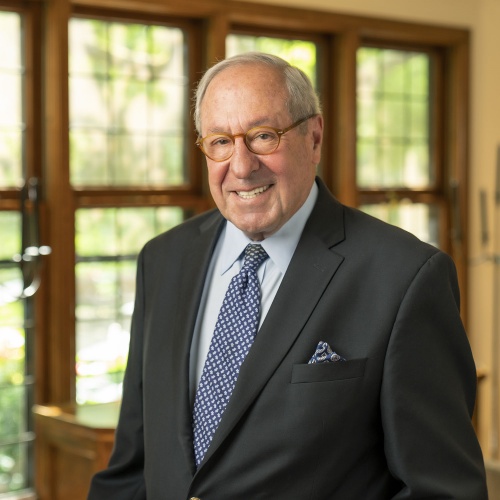 Born in Rochester, New York, Thomas W. Adler moved to Shaker Heights with his family in 1952 at age 12. Severe early childhood asthma caused him to miss a lot of school and fall behind academically. “As a result, I suffered from low self-esteem when I was young,” he recalls. But that all began to change when he was introduced to swimming at a summer camp and he excelled at it.

Once in high school he set Shaker pool and District records. That experience gave him confidence and helped get him get accepted into the University of Wisconsin. It was also at Shaker Heights High School that he met his wife of 57 years, Joanie. They married shortly after graduation from college. The two have three children and two grandchildren.

“The rough start as a kid was probably a source of some of the drive I had later,” Mr. Adler says. “I think I had to prove to myself that I could accomplish things of my own.” He also was highly motivated by his parents, particularly his father, a leader in the men’s apparel industry.

By his mid-30s, Mr. Adler was Chairman of the Executive Committee of a large Cleveland commercial real estate firm. At age 38, he co-founded his own company that specialized in selling investment-grade properties to pension funds. When the firm was bought in 1986 by San Francisco-based Grubb & Ellis, he was invited to serve on the management committee and start a new national division. At age 50, he left and founded a consulting firm, Cleveland Real Estate Partners.

Mr. Adler sold his interest in that company to his younger partners and became a full-time volunteer and philanthropist by the age of 60. In 1999, he helped start what is now known as Playhouse Square Real Estate Services. In 2006, he became Board Chair of Playhouse Square Foundation. His work at Playhouse Square, pro bono from the start, led Mr. Adler to get involved with Cleveland State University, which would later move its Theatre and Dance program, as well as its School of Film and Media Arts, to Playhouse Square. As a trustee of CSU, Mr. Adler helped lead the school’s first campaign, which raised over $100 million, and has been instrumental in the successful effort to engage the business community more with CSU.

In 2015 Mr. Adler was named one of the most connected powerbrokers in Northeast Ohio by Crain’s Cleveland Business. 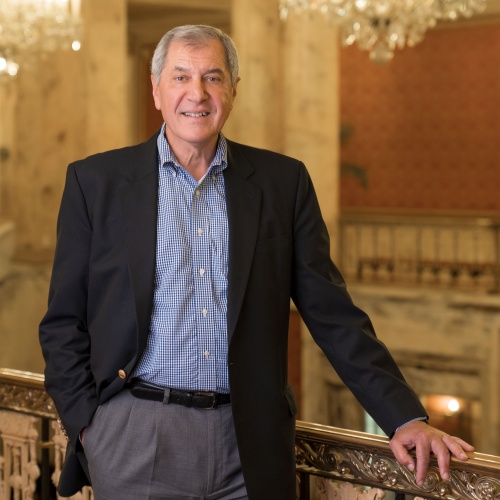 Art J. Falco grew up in Painesville Ohio and earned a bachelor’s degree in accounting from Bowling Green State University (where he also met his wife Maryann). He began his career in the accounting department of the former Diamond Shamrock Corp. (a chemical, oil and gas company) in its Fairport Harbor and Chardon offices and also worked at Natural Impressions in Painesville.

In 1985 Mr. Falco joined Playhouse Square as finance director. In 1988 he was promoted to vice president of finance and administration. Three years later, he became president and CEO of Playhouse Square. He succeeded Larry Wilker, whom he cites as a mentor who taught him the theater business.

Mr. Falco held that position until his retirement in June 2019. “I saw an organization where there was a vision beyond the renovation of some theaters … It was more about being a catalyst for the development of the neighborhood,” he says.

It was under Mr. Falco’s leadership that Playhouse Square completed the world’s largest theater restoration project and expanded its business model to include real estate development.

With 11 stages and more than 1 million guests annually, Playhouse Square is the largest performing arts center outside of New York. Its 46,000 season subscribers make up the largest Broadway series season ticket holder base in the nation and its 2,000 volunteers surpasses other arts centers.

Those who know Mr. Falco knows he is quick to spread credit and praise around for the success of Playhouse Square. It’s a combination of the staff, theater-goers, volunteers and much more, he says. “At the end of the day, it’s been knowing what customers want and satisfying their needs.”

Also important to Mr. Falco and Playhouse Square are its many productive, long-lasting partnerships with a wide range of local businesses and educational and arts organizations. “There’s so much talent in this area. That’s what I appreciate,” he says.

“What I’ve learned is the performing arts – all art – can change lives,” he says. “And it’s not just quality of life; theater increases confidence and self-awareness, exposes the participant and the audience member to myriad subjects they might not otherwise discover, and it just helps create a better, well-rounded person.”

Mr. Falco’s role has now changed to senior advisor for special projects to Playhouse Square through its completion (expected in 2020) of The Lumen, a 34-story, 318-unit apartment tower at Euclid Avenue and East 17th Street. He also continues to serve as an adviser and in board roles for the Cleveland Restoration Society, Destination Cleveland, Downtown Cleveland Alliance and Playhouse Square District Development Corporation. 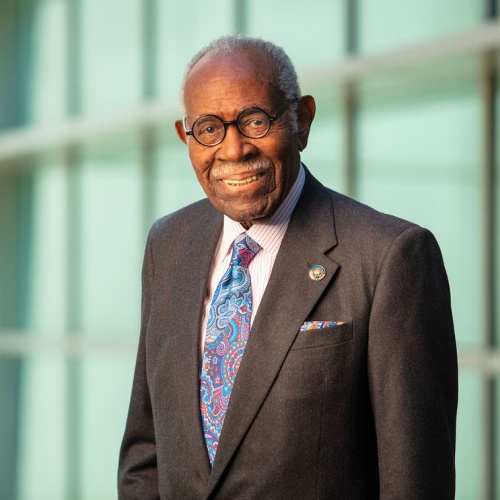 The great-grandson of slaves, Robert P. Madison was born in 1923 in Cleveland. His family moved to Alabama, then South Carolina, then Washington, D.C. before returning to Cleveland, where Mr. Madison graduated from East Technical High School.

Initially enrolling in the School of Architecture at Howard University in Washington, D.C., Mr. Madison left college to enlist in the military during World War II. He was a recipient of the Purple Heart and five combat ribbons.

After a brief time studying at the University of Pisa in Italy, Mr. Madison returned to the United States. He enrolled in the Cleveland School of Architecture at what is now Case Western Reserve University. He earned a bachelor’s degree in 1948 and worked briefly before enrolling at Harvard University, where he completed a master’s degree in architecture.

While teaching at Howard University in Washington, D.C., Mr. Madison was awarded a Fulbright Scholarship at L’École des Beaux-Arts in Paris. He came back to Cleveland and, in 1954, founded RPMI International with two of his brothers. The company would grow to become one of the largest minority-owned architectural and engineering firms in the United States.

Mr. Madison has designed hundreds of spaces around the globe, and he helped shape the Greater Cleveland community with his award-winning designs. Medical spaces, schools and churches, particularly in African American communities, has been especially gratifying for Mr. Madison. “Medical buildings were always very compelling because designing them meant creating spaces where doctors could (save) people’s lives,” he says in his memoir, Designing Victory (Act 3 Publishing, 2019).

The design contributions of Mr. Madison, who in 1974 was inducted into the prestigious College of Fellows of the American Institute of Architects (and later served as that organization’s Chairman of the Jury of Fellows), can be seen throughout Cleveland at the Rock & Roll Hall of Fame, the Cleveland Museum of Art, Rocket Mortgage FieldHouse, the FirstEnergy Stadium, the Gill and Tommy LiPuma Center for Creative Arts at Cuyahoga Community College, the Greater Cleveland Regional Transit Authority HealthLine, the Great Lakes Science Center, the Cleveland Museum of Natural History, the Hilton Cleveland Downtown Hotel and the Cleveland Public Library.

His community service includes board positions with the Cleveland Opera, the Cleveland Orchestra, CWRU, and the Cleveland Museum of Art, among others. He was involved in the NAACP, Urban League, Cleveland State University and Boys & Girls Clubs. And he founded the Robert P. Madison Scholarship for Architecture for African Americans who want to study architecture.

Mr. Madison retired in 2016. In 2018, Deeds Not Words, a documentary about Mr. Madison, screened at the DC Black Film Festival and Harlem International Film Festival before being shown in September to a hometown audience at the Greater Cleveland Urban Film Festival. 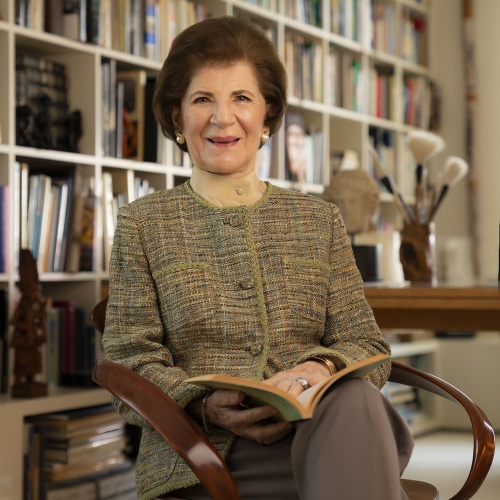 Barbara S. Robinson’s parents, both native Clevelanders, were highly engaged citizens, as well as music and art aficionados. Her father, an accountant by profession, was a violinist and violist. “I went along and sat for my father’s rehearsals with the Cleveland Philharmonic,” Ms. Robinson says. “And he used to have many of his friends gather at our house to play chamber music. Music was just part of my life.”

Ms. Robinson began studying at the Cleveland Institute of Music at age 3 ½, eventually learning to play the violin, flute, and piano.

Both her parents were very active volunteers in the community. “My parents taught me at an early age that my ideas could be accepted.” She credits them for her reputation as a conversation leader, consensus builder and activist.

Ms. Robinson decided against pursuing a career as a professional musician. She graduated Phi Beta Kappa from Wellesley College with degrees in philosophy and psychology. As an undergraduate, she performed as a piano soloist with the orchestras of the Boston Pops and New England Conservatory of Music. She earned her MBA from Radcliffe College, part of a of a small group of women invited to participate in the Harvard Program in Business Administration.

After college, she met and married Larry Robinson and started a family in Chicago. (The two were married for 50 years until Larry’s death in 2003.) Ms. Robinson was a business consultant to new ventures and a piano recitalist. When the young family returned to Cleveland, she left her full-time consulting work behind and began her full-time-plus volunteer career.

She became aware that in Cleveland “there wasn’t much music education available to young children in the public schools.” She knew of groups in Philadelphia and New York forming something called Young Audiences. So, she set out to bring that concept to Cleveland. Not only was she the founder and chair, she would go on to serve as vice president and assistant treasurer of the National Board of Young Audiences, Inc.

Ms. Robinson also helped bring in funding for and organizing the Cleveland Ballet. She served as chair of the Ohio Arts Council. As chair of the National Assembly of State Arts Agencies, she testified before Congress to prevent the National Endowment for the Arts from being abolished. She also co-chaired the Cuyahoga County Arts & Culture Action Committee to promote passage of Issue 18, aka the “cigarette tax,” in 2016 renewed as Issue 8. Her volunteer service also includes leadership positions with the Musical Arts Association (the Cleveland Orchestra’s governing board), the Cleveland Chamber Music Society, the Cleveland Institute of Music, the Cleveland Museum of Art, Arts Midwest, Leadership Cleveland, University Hospitals, the Maltz Museum of Jewish Heritage, and more.

In 1999 Ms. Robinson was elected to sit on the Harvard Board of Overseers, which would be involved in bringing in a new president of the university.