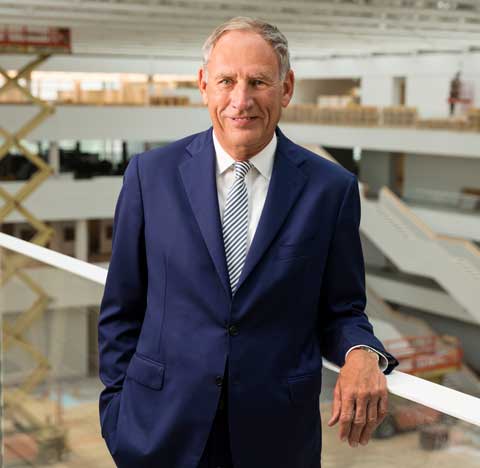 A native of Watertown, New York, Toby Cosgrove was a self-described average student. He graduated from Williams College in Williamstown, Massachusetts before going onto medical school – the only one of 13 he applied to that accepted him – at the University of Virginia School of Medicine in Charlottesville.

Residency training was interrupted by the Vietnam War. Dr. Cosgrove worked in a hospital in Da Nang and was awarded the Bronze Star Medal for his work as chief of the U.S. Air Force Casualty Staging Flight; at age 28, he and his small team evacuated more than 22,000 wounded.

Diagnosed with dyslexia in his 30s, Dr. Cosgrove says he chose surgery over other professions because it relied less on reading and writing and more on his dexterity. In a cardiac surgery career that spanned nearly 30 years, he earned an international reputation for expertise in valve repair.

Fourteen years after joining the Cleveland Clinic, Dr. Cosgrove in 1989 was named chairman of the Department of Thoracic and Cardiovascular Surgery. After being named Cleveland Clinic President and CEO in 2004, succeeding Floyd “Fred” Loop, MD, Dr. Cosgrove stepped away from his surgical practice.

“One of the reasons Cleveland Clinic is a success is because it’s in Cleveland,” Dr. Cosgrove says.

“Cleveland is a good filter. People are not coming here to go to the beach or to ski. They’re coming here to work,” he says. “So, when you recruit someone here, they are coming to participate.” And then “they inevitably fall in love with the city.”

One such recruit was Tom Mihaljevic, MD, who joined the hospital system the same year Dr. Cosgrove became CEO. In his first “State of the Clinic” address, Dr. Mihaljevic credited his successor with leading the Cleveland Clinic to astonishing heights, noting that in 2017 alone, Cleveland Clinic ran one of the largest graduate medical education and training programs; opened the $276 million, 377,000-square-foot Taussig Cancer Center; built new rehabilitation centers and urgent care facilities; logged thousands of telemedicine visits; and continued to increase its uncompensated care and community activity.

Author of a book (“The Cleveland Clinic Way”) and nearly 450 journal articles and book chapters, Dr. Cosgrove has filed 30 patents for surgical innovations. In July 2018 he was named executive adviser to Google’s Healthcare & Life Sciences team.

Dr. Cosgrove is married to lawyer Anita Cosgrove and has two daughters. 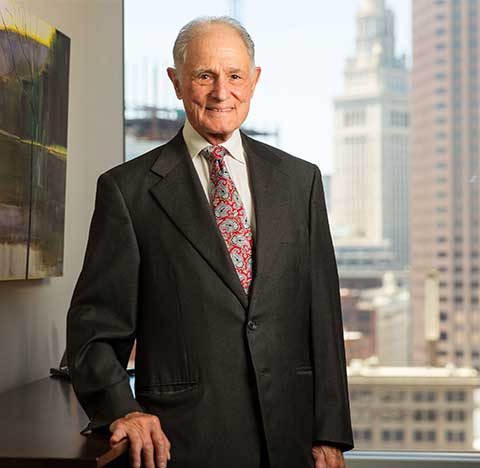 Bob Gries followed in his father’s footsteps to attend Yale University. But the Cleveland native returned to the city after graduating in 1951 to join the May Company, which his mother’s father had built into the largest department store chain in Ohio.

“I always knew it was my job to stay here and try to make some difference as a fifth-generation Clevelander,” he says.

Mr. Gries is fiercely proud of his lineage. A paternal great-great-grandfather, Simson Thorman, was the first Jewish settler in Cleveland, arriving in the early 1830s from a small town in Bavaria. He established the city’s first synagogue and was elected to City Council.

Paternal grandfather Rabbi Moses Gries was rabbi of Cleveland’s largest Reform temple and was instrumental in the founding of numerous Jewish and community organizations. Maternal grandfather Nathan Dauby was the builder of the May Company and a leading business and philanthropic leader.

Mr. Gries’s father, businessman and philanthropist Robert Hays Gries, was one of the founders of both the Cleveland Rams and the Cleveland Browns football teams.

In the early 1960s he started a career in venture capitalism, an industry then in its infancy.

As treasurer of Carl Stokes’s mayoral campaign in 1967, he had a front row seat to history. He continued being politically active with such notable figures as the late George Voinovich and Michael R. White.

Since age 51, Mr. Gries – author of “Aging with Attitude” – has traveled to 45 countries on all seven continents in his pursuit of physical adventures such as long-distance running, mountain climbing, biking and high-altitude hiking.

At age 89 he still serves on the boards of American Jewish Committee, Boy Scouts of America, Cleveland Play House and Vocational Guidance Services – each for 50 years and counting – and a half dozen other organizations.

Mr Gries credits much of his success to his wife Sally Gries, with whom he remains active in the philanthropic landscape of Cleveland.

All but one of the sixth generation of the Gries family live in Cleveland and are finding ways to give back to the city. Six of the seven who make up the seventh generation have grown up in Cleveland. “I hope and expect some of them will settle here and carry on the family legacy,” he says. 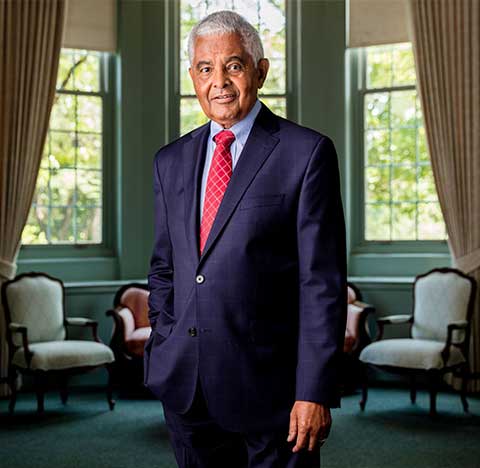 Born in Akron and the eldest of eight children, Steve Minter credits his parents, Lawrence and Dorothy Minter, and his Midwestern upbringing, for much of the good he’s been able to do for and with his neighbors.

“My dad was a very skilled laborer, and ultimately became the first African-American county superintendent appointed by the Ohio Department of Transportation,” Mr. Minter says. “He set a very good example. But I was also highly influenced by my mother.

He earned a bachelor’s degree in education from Baldwin-Wallace College and later would complete a master’s degree in social administration from the Mandel School at Case Western Reserve University (CWRU).

During the 1970s he served as the commissioner of public welfare for the Commonwealth of Massachusetts. And in 1980 he assumed the role of the first undersecretary for the U.S. Department of Education during President Jimmy Carter’s administration.

Otherwise, Mr. Minter has resided and worked in and around Cleveland his entire life, beginning his career as a caseworker at the Cuyahoga County Welfare Department (dashing early hopes of becoming a high school coach), and rising to director.

In 1984, after nearly a decade as a program officer and associate director of the Cleveland Foundation, Mr. Minter became the organization’s director. He served there until his retirement in 2003.

“It’s not to say it wasn’t hard and frustrating at times,” he admits, “but to really be engaged, to help turn around the Cleveland public schools, to effectively deal with the desegregation of the schools, to make progress with early childhood education, to see Lexington Village and Beacon Place [part of the Hough neighborhood revitalization] come to fruition . . .

“I had the opportunity to be a participant. I was able to work with governors, mayors (and) county commissioners, as well as private sector officials in trying to advance Cleveland. What a privilege.”

In September 2003, he was appointed executive-in-residence and a fellow at the Center for Nonprofit Policy & Practice in the Maxine Goodman Levin College of Urban Affairs at Cleveland State University. He also served as interim vice president for university advancement and executive director of the CSU Foundation.

Among his many accomplishments and honors, Mr. Minter takes joy in being the father of three accomplished daughters and, in 1991, the co-recipient of the Humanitarian Award from the Diversity Center of Northeast Ohio with his late wife, Dolores (Dolly) Minter. 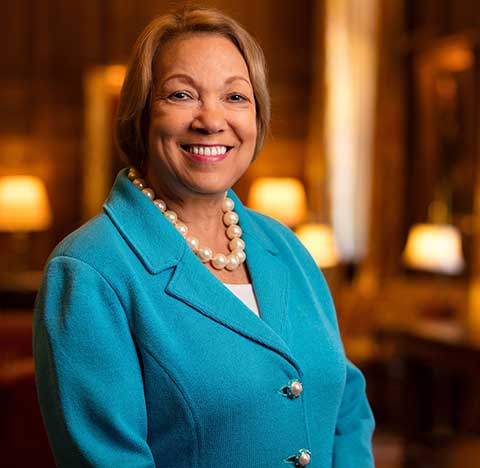 Jerry Sue Thornton, PhD, grew up in a small farm community in Kentucky, the daughter of a union coal miner and domestic worker. Following high school, she went to Murray State University in Murray, Kentucky, where she earned her bachelor’s and master’s degrees.

“I always loved learning,” she recalled. “Teaching is what I always wanted to do. My heart is in the classroom.”

After teaching for a decade at the sixth-grade, high school and college levels, Dr. Thornton accepted several administrative roles, including dean of arts and sciences at Triton College in Illinois and president of Lakewood Community College (now Century College) in Minnesota.

“I realized I could shape policies and procedures within school districts and institutions and influence the education of many more students in a leadership role,” says Dr. Thornton, who earned her doctorate in educational administration at The University of Texas at Austin.

In 1992, Dr. Thornton moved to Northeast Ohio to accept the position as president of Cuyahoga Community College.

“I didn’t know anything about Cleveland when I was offered the position here,” she admits. “But Cleveland made me realize quickly how much I like urban environments. I like the energy of cities, the grittiness of cities, the people who reside in cities . . . I like resolving issues that matter in cities.”

Under Dr. Thornton’s leadership, Tri-C became an economic force in the region, employing more than 3,000 faculty and staff and adding more than $115 million in additional labor and non-labor income. In addition:

• A student scholarship endowment grew from $1.3 million to more than $38 million. Further, the college maintained the second-lowest tuition in the state, and the curriculum grew to more than 1,000 credit courses in more than 140 career and technical programs.

Dr. Thornton has provided leadership to and supported activities of more than a dozen organizations and events in Cleveland, including the United Way of Greater Cleveland, the Rock & Roll Hall of Fame, Playhouse Square, The MetroHealth System, the Cleveland Museum of Art and the Cuyahoga Community College Foundation. She and her husband Walter Thornton enjoy taking part in Cleveland’s many cultural activities.