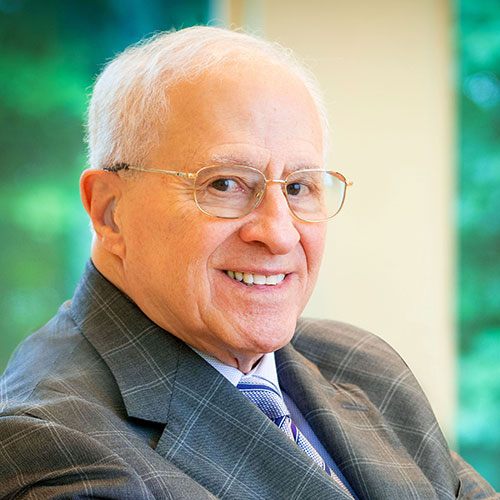 As a youngster, Dick Bogomolny studied violin under the Cleveland Orchestra’s principal second violinist. He later served as concertmaster of the Harvard University Orchestra and principal violist of the Cleveland Philharmonic Orchestra.

“In junior high, I set some goals. I wanted to play the violin, I wanted to play football and I wanted to get good grades,” he says. He accomplished all three. Upon the death of his father, however, the young Mr. Bogomolny felt responsibility to return home to run the family business with his mother – also an accomplished violinist.

He attended college at night while operating the Eagle Ice Cream Company, later graduating from Western Reserve University and Cleveland-Marshall College of Law. He was admitted to the Ohio Bar in 1961, though was destined to become a business entrepreneur.

Under Mr. Bogomolny’s leadership, Eagle Ice Cream Company became the largest and most modern ice cream manufacturing facility in Northeast Ohio. Fisher Foods, Inc. purchased the company in 1968 and installed Mr. Bogomolny in key leadership positions. In 1972, he left Fisher Foods and joined supermarket magnate and “second father” Julius Kravitz in the purchase of Pick-N-Pay. In 1975, at the age of 40, he became president and CEO.

Two years later, Pick-N-Pay Supermarkets merged with the much bigger First National Stores (operating under the name Finast) to become one of the largest supermarket chains in the country. In 1978, after the death of Mr. Kravitz, Mr. Bogomolny assumed the additional role of chairman.

Mr. Bogomolny sold controlling interest in First National to Royal Ahold NV in 1986. With support of city leaders, he built and operated seven new superstores in Cleveland’s inner city – and hired neighborhood residents to work in them.

“Most of our customers could walk to the stores, but we also provided buses where needed,” notes Mr. Bogomolny. “I remember women looking at the stores and saying things like, ‘We don’t believe someone would do this for us.’” At the time of Mr. Bogomolny’s retirement five years later, his nine-state chain had 300 stores, close to $2.5 billion in sales, and approximately 14,000 employees, he recalls. In May of 1992, Mr. Bogomolny became the first American to be elected to the supervisory board (board of directors) of Royal Ahold NV.

Mr. Bogomolny has devoted much of his time, talent and resources to humanitarian causes, at one time serving on 22 nonprofit boards. He is particularly gratified to have been a founding member and advisor to the Northern Ohio Foodbank.

Emeritus chairman, former chairman and former president of the Musical Arts Association/The Cleveland Orchestra, Mr. Bogomolny served on the steering committee that raised $115 million for the organization and provided the lead gift. Under his leadership, The Cleveland Orchestra collaborated with a group of seven major arts and education organizations to create the Violins of Hope – Cleveland project.

Mr. Bogomolny is a former vice chairman of the Mt. Sinai Health Care Foundation; emeritus trustee, Jewish Federation of Cleveland; chair emeritus of the Cleveland Institute of Music; and former chairman of the Northern Ohio Regional Board of the Anti-Defamation League. He is a life member the ADL national executive committee.

He has been honored for his civic leadership and community service by the then Jewish Community Federation, Chamber Music America, the Jewish National Fund, and the Oheb Zedek Cedar Sinai Synagogue, among other organizations.

Mr. Bogomolny and his wife, Patricia M. Kozerefski, reside in Gates Mills. The couple adopted a daughter from China and are parents to three sons from his previous marriage. They have seven grandchildren and three great grandchildren. 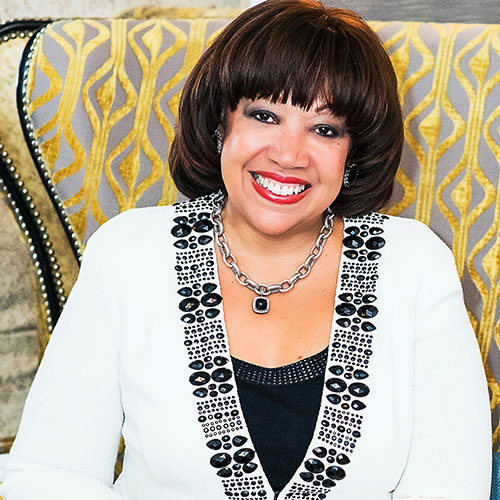 Margot James Copeland grew up in Petersburg, Virginia, the only child of a Baptist minister and an 8th-grade math teacher. The retired chair and CEO of KeyBank Foundation credits her success and her “conviction for community and education” to her family, her hometown and to the hard-fought changes brought about by the Civil Rights Movement.

Ms. Copeland attended Hampton University in Virginia, majoring in physics at the HBCU and becoming a National Science Foundation scholar. Ms. Copeland earned a master’s degree in educational research and statistics from The Ohio State University, where she is recognized as an Esteemed Alumna.

Her career began at Xerox Corporation and advanced to roles of increasing responsibility at Polaroid Corporation, AmeriTrust Bank and Picker International (now Philips). Ms. Copeland’s passion for community service was supported by each of her employers.

She joined the Junior League of Cleveland – a rarity for Black women at the time – and later became the organization’s first Black president. In 1991, she was accepted into Leadership Cleveland. From class member, she became the program’s executive director. She had served in that role for nearly a decade when she was recruited to lead the Greater Cleveland Roundtable, which created a robust diversity consulting and training practice. Additionally, the Cleveland Council of Economic Inclusion was founded under her leadership, and remains a force today for advancing diversity, equity and inclusion throughout Northeast Ohio.

In 2014, Ms. Copeland became the second person ever to be honored with the Community Impact Award from American Banker, a recognition she refers to as “prized.”

Ms. Copeland says, however, that her “proudest moment was when Cleveland was awarded a Say Yes to Education chapter.” As a national board member, she helped bring attention to the community’s application and guided it through the competitive process.

In 2010, Ms. Copeland was elected national president of The Links, Incorporated, an organization of women devoted to strengthening African American communities. In that role, she was invited to the White House for President Barack Obama’s signing of the My Brother’s Keeper initiative and delivered remarks on the steps of the Lincoln Memorial on the 50th anniversary of the March on Washington. During Ms. Copeland’s presidency, The Links awarded $4 million in scholarships and program grants, including a $1 million donation to the Smithsonian National Museum of African American History and Culture.

Currently, Ms. Copeland serves on the board of trustees for Cleveland Clinic, The Cleveland Orchestra, the Port of Cleveland, Rock & Roll Hall of Fame Museum and AARP National. She also was the co-vice chair of the Cleveland Bi-Centennial Commission and served on the boards of the Great Lakes Science Center, Playhouse Square Foundation, Philanthropy Ohio, University Hospitals Health System and myriad other organizations.

Appointed by Ohio Governor Ted Strickland, she recently concluded nine years with the Kent State University Board of Trustees.

Ms. Copeland lives in Shaker Heights and is the mother of three adult children. 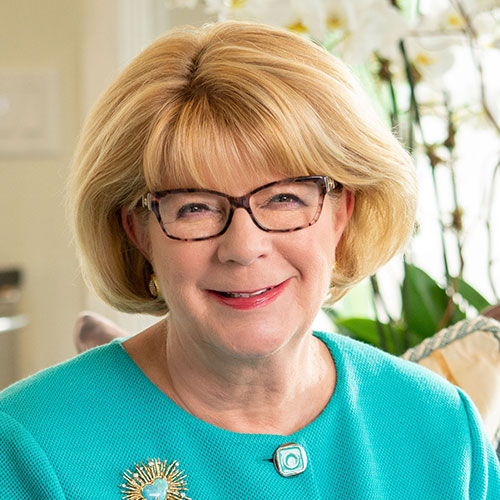 Early on, while pursuing her MBA from Southern Methodist University, Ms. Mooney laid the groundwork that would serve her well over the span of her career. By the time she was 30, she had become the youngest senior vice president of the largest bank in Texas. She went on to become president, Bank One (Ohio) in 1999 before taking executive positions at Tennessee and North Louisiana Banking Group, AmSouth Bancorp (now Regions Financial Corp), and Key Community Bank. By 2011 she was chair and CEO of KeyCorp.

When Ms. Mooney began her career, there was not a lot of diversity in management and leadership in the banking industry. “One thing I always say is, ‘when you walk into a room and you’re the only woman … sit down and act like you belong. And never lead with your differences; always seek the common ground.’ I felt it was not just my opportunity to fit in, but my obligation, in the best sense of the word, to square my shoulders and take my seat at the table.”

Ms. Mooney retired from KeyCorp (and primary subsidiary KeyBank) in 2020. She holds the distinction of being the first female CEO of a Top 20 U.S. bank and was named the Most Powerful Woman in Banking in 2013, 2014 and 2015 and ultimately Banker of the Year in 2017 by American Banker. She is credited with leading KeyCorp through an economic crisis that crushed its competitors. Through an ambitious acquisition, she increased KeyCorp’s size by 40%, making it the 13th largest bank in the U.S., and nearly doubling the value of its stock.

KeyCorp is the only national bank with 10 “outstanding” ratings under the Community Reinvestment Act. “This measures our products, services to and impacts on minorities and underserved parts of our communities,” Ms. Mooney explains. “In 2016, we announced a $16.5 billion, five-year commitment to affordable housing, home lending, and small business start-ups for the underserved. It was transformative philanthropy at a time no one was doing it.”

Ms. Mooney is chair of Cleveland Clinic Board of Directors and has served in leadership roles for the Cleveland Orchestra/Musical Arts Association, Greater Cleveland Partnership, ideastream, Cleveland Neighborhood Progress, Say Yes to Education and United Way of Greater Cleveland, among myriad other local nonprofits. In addition, she is on two national nonprofit boards and is a trustee of The Brookings Institute and The Conference Board.

In addition to her philanthropy and continued leadership in the community, Ms. Mooney serves on three for-profit boards – Accenture, AT&T and The Ford Motor Company. 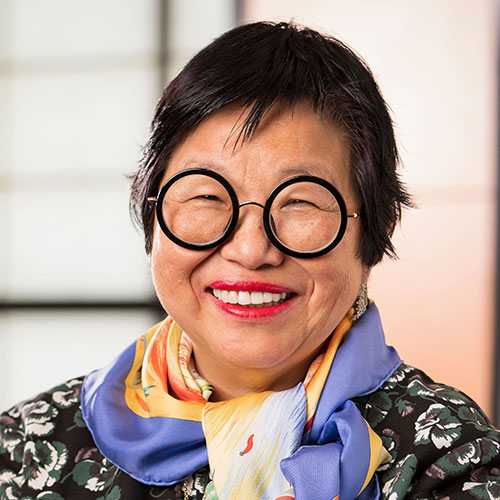 Margaret Wong traveled from Hong Kong to the U.S. in August 1969 at the height of the Vietnam conflict. She and her younger sister each carried two suitcases and student visas that allowed them to enroll at an all-girls’ Catholic junior college in Iowa. The sisters then attended Western Illinois University. Ms. Wong followed that with law school at the State University of New York Buffalo.

Despite her newly-minted status as a lawyer, finding work – and keeping it – was a struggle. “There were many forces at work. I was foreign born. A woman. Asian. Employers at the time were not eager to hire women, let alone Asian women. So eventually I hung out my own shingle, renting an office with one desk.”

It was a good move. Today Margaret W. Wong & Associates, LLC, has more than 60 employees working in nine offices in eight states. Ms. Wong is founder and managing partner of the award-winning immigration and nationality law firm.

But that hasn’t been Ms. Wong’s only business venture. In the early 1980s, Ms. Wong and her family opened Pearl of the Orient restaurant “to fill the void of really good Chinese food.” Everyone in the family worked there, herself included. After a few successful years in Shaker Heights, she helped her brother open a second restaurant in Rocky River; that popular location closed in the summer of 2021 after more than 35 years.

Over the years, the firm has had a number of precedent-setting cases, and in the past year had several cases before the United States Supreme Court.

“The fight for social justice is long,” she says. “The enjoyable part is knowing you are fighting for a just cause … and when it’s finally recognized as such, you can celebrate.”

Ms. Wong points out that the Cleveland Asian community started in the late 1800s, so she considers herself a relative newcomer. “But both my job and family have made me a senior statesperson, both locally and nationally,” she acknowledges. With that comes responsibility.

Ms. Wong has volunteered her time and resources to diverse organizations, including American Immigration Lawyers Association, Asian American Bar Association of Ohio, Case Western Reserve University School of Law, Cleveland Public Library Foundation, Diversity Center of Northeast Ohio and the University at Buffalo, where Ms. Wong has endowed 15 scholarships and co-chaired a successful $30 million capital campaign. She also created a $100,000 scholarship at Cuyahoga Community College (from which she received an honorary degree) and in 2011 established the Margaret W. Wong Endowed Forum on Foreign Born Individuals of Distinction at the City Club of Cleveland. She is a life member of both the Eighth Judicial District Court and the United States Court of Appeals for the Sixth Circuit.

Ms. Wong and Mr. Chan, who died in 2014, have two adult children, Steven and Allison. Ms. Wong’s children work in her law firm, along with her sister and her sister’s sons.